Put On A Pedestal 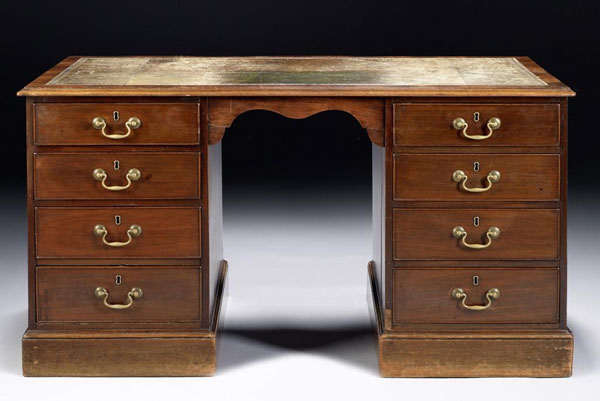 A George III mahogany partner’s pedestal desk which belonged to General Sir Miles Dempsey, the first person to be knighted in the field since the battle of Agincourt over 600 years ago, is one of the highlights at Bonhams Fine Furniture sale on November 20th at New Bond Street.

The desk is offered with estimates of £5,000-7,000 and consists of a rectangular moulded top, complete with a tooled green leather inset writing surface; four graduated drawers flank a shaped kneehole on the front and a similar arrangement of simulated drawers appear on the reverse.

An engraved silver plaque inside the top drawer of the desk reveals that the piece was a wedding gift, presented to General Sir Miles Dempsey and his wife Viola O’Reilly. The plaque reads: “Presented to General Sir Miles Dempsey. KCB, KBE, DSO.MC, Colonel of the Royal Berkshire Regiment. By officers past and present not serving with any of the battalions, and their wives, on the occasion of his marriage, the 2nd March 1948”.

Having graduated from the Royal Military Academy Sandhurst in 1915, Dempsey joined the Royal Berkshire Regiment as a young officer, fought on the western front, and was awarded the Military Cross for bravery in the field. After the war, he rose to the rank of Lieutenant Colonel, and was awarded the Distinguished Service Order for his role and leadership as rear guard protection for the evacuation of Dunkirk. By 1942, he had been promoted to lieutenant General, and he was personally chosen by Field Marshall Montgomery to plan and oversee the British 2nd Army’s assault of the D-Day landings 6th June 1944. As well as being considered one of the master minds and pivotal commanders behind the famous ‘D-Day’ Normandy landing on 6th June 1944, formally known as operation ‘Overlord’, Demsey was the first person to be knighted in the field since Agincourt in 1415.  It was at the legendary battle of Agincourt that Shakespeare’s Henry V speaks the famous lines, “Once more unto the breach, dear friends, once more;” (Shakespeare, Henry V, Act III). After the war, General Dempsey was appointed as the military commander of the Middle East in 1946.

A George III satinwood and carved mahogany dining room pedestal together with a later copy in the manner of Robert Adam are to be sold as a pair and are expected to fetch between £40,000 and £60,000.

The 1760s saw a rise in the popularity of sideboard pedestals and urns: Pedestals provided extra storage and often contained a plate warmer or a cellaret drawer, and urns were usually lined to hold either iced water for drinking or (less particular) water for rinsing. Each of the pedestals on offer at the Bonhams sale stand at almost 2 meters in height. The original contains a lead lined drawer and shelf, with a concealed tap in the top; the later copy is made entirely out of mahogany.

The lidded classical urns that rest on top of the ovoid bodies are intricately decorated; applied ram’s heads and male and female portrait medallions add a touch of humanity to the otherwise floral scenes. Stepped square plinths prop up the ovoid bodies, whose fronts display pictorial versions of the classical urns that they support—just as the folk engage over their dinner, those found on the dining room furniture converse.

Another highlight is an exquisite late Victorian satinwood, tulipwood, harewood and sycamore decorated marquetry demi-lune commode, in the George III style after a design by Robert Adam. The commode measures 152.5 x 67 x 94cm and is estimated at a value of £20,000-30,000.

The commode’s D-shaped top is beautifully inlaid with bell-flower chains, beading, medallions, fruiting and flowerheads. A central curved panel door is painted roundel depicting Cupid in his Chariot and the Three Graces. The shelves are flanked by moulded panels decorated with Classical urns, anthemions, rams heads, and drapery.